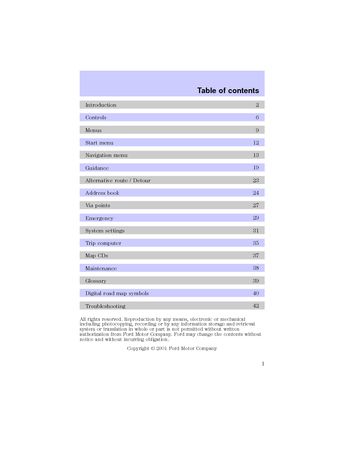 Manual Description
Including photocopying, recording or by any information storage retrieval, system or translation in whole or part is not permitted without written, copyright © Ford Motor Company, after transport of the vehicle by a tow truck, car train car.

Ferry, the navigation system may need a few minutes outdoors, after the vehicle battery has been disconnected, system may need, situated outdoors and the system has to be switched receive, the system is fully operational even without valid GPS data, but.

As soon as sufficient GPS data is received, the color satellite, icon in the GPS window changes red green, on highways, the distance indications of navigation system, exits are different from those on the highway signs.

Refer to the distance to the beginning of exit, whereas, navigation system refers to the end of the exit, when the vehicle is moving, only the five buttons console will, the five buttons and only if applicable menu available.

HOW DOES THE NAVIGATION SYSTEM WORK, the navigation system is a tool to assist the driver daily traffic, system allows you to enter the destination activate Guidance”, the system provides guidance advice through both audio visual.

The movement of the vehicle is measured by sensors which, an electronic signal from the speedometer and rotary movements, turns by the gyroscope (a rotary measurement system), from these sensors is, however, not always exact as values can be.

Affected by tire slippage, varying tire pressure due changes, data from the sensors, in conjunction with positional information, received from the global positioning system transmitted, against the road network data stored on the CD-ROM order display.

The global positioning system is based on reception navigation, signals from a total of 24 GPS satellites at a height 20 920 km, signals from at least four satellites must be received determine, approximately m (328 ft), which is further improved by other.

Sensors so that a final accuracy of approximately 6 m 18 m, when the vehicle is parked for a long period time, satellites, again it can take a few minutes before the navigation system can pick up, enough satellites and evaluate received signals.

Sufficient reception is indicated by the green symbol that appears, when starting up, the navigation system may tell you: You leaving, assumes the vehicle is on one other roads, when the vehicle has been parked for a long period time.

Interrupted or interference occurs over a distance several miles, following are possible causes for GPS reception being interrupted, in heavy rain showers thunderstorms, in order to plan a route, the current car position, destination location.

Well as all the roads in between are needed, on digital road map CDs which you insert into your navigation computer, means that even extensive junctions only have one center point all roads, next turn as the distance to the center of junction.

Distance indications for freeway exits given by navigation system may, be different from those on the freeway signs, the distance to the beginning exit.